n 10 days, many things have happened. Beginning with our departure from Wawa and Naturally Superior on Sunday, August 20th. Our stay at Wawa was great and filled with great encounters and discussions, including Dave (owner of Naturally Superior), other visitors and Ewan and Sophie, a couple of adventurous, nomadic people who are really fascinating. Originally from Australia and New Zealand respectively, they guide in Antarctica during the summer season of the Southern Hemisph

Normally for the blog, I summarize what we have done and lived for each of the days. Talking yesterday at dinner with Dave from Naturally Superior Adventures, I realized that I did not put enough emphasis on what makes this adventure so unique, inspiring and different. Our encounters with people have changed us, made us evolve, made us think, inspired us. We left and sold everything a little more than three years ago thinking that we were going on a canoe adventure. Today, we 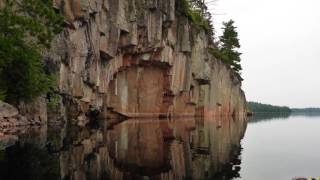